We will return to our regular scheduled broadcast shortly, but first, breaking news...


It's release day for Iron Thirst!

Funny thing, too! Last night, I finished all the steps to have it published, and the little message I received said it would take about three days. That seemed fine to me, because DragonCon is this weekend, and DragonCon was my goal. However, when I checked this morning, I was shocked to find it was already sitting happily on Amazon.

This was so huge for me. This may be one of the biggest TO-DO items that I have ever checked off of my list. Every year I get so mad at myself when yet another DragonCon passes and Iron Thirst still is just hanging out on my computer, completely left out of the party. This year it is dressed and ready to go.

Currently, only the Kindle version is available. You can download the sample to see if it's your bag.  I'm working on the details for the paperback version, and I hope to have that available soon for those of us who still prefer to dog-ear pages. I'm not leaving anyone out. Hell, once that happens, I can send a copy to my mom! Don't you think she would love to read about vampires, murder, and mayhem?! (No, no, she wouldn't. She will hate it. But, she would still be proud of it.)

So, if you have a few spare minutes toss this one in your "to be read" pile. 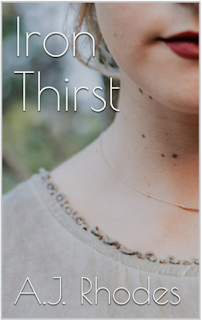 
Adam Bristow is a sarcastic forensics biologist, who has been tasked to keep an eye on the vampires that are popping up all over DragonCon. He and his team are in charge of keeping the vampires a secret and not letting the costumed fans become lunch. Armed with wit, guns, and a stiletto, he realizes quickly that his team is outnumbered and headed for trouble, although he would never admit that out loud.

Meanwhile, looking for an escape from the norm, Felicity Johnson dresses for trouble, and finds it when she steps into the magic of this pop culture convention. The trip that started as a search for adventure leads her down a path that could leave her either dead or with the ultimate makeover, one that can only be undone with a stake to the heart.

Iron Thirst is a funny, murder mystery, with a love story.

A special thank you so much to those who have already downloaded it!

Follow me. No clue where I"m going, but it should be fun.